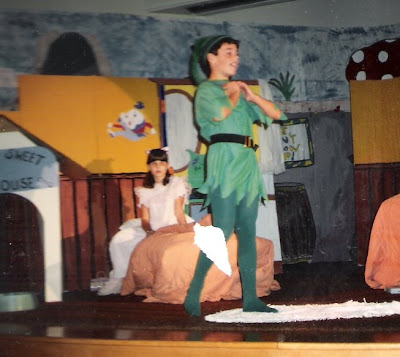 Never before had I auditioned for anything… all plays up until this point the teachers had just assigned parts. This included our recently performed sixth grade play, Julius Caesar, which worked perfectly for us – there were only four girls in our class (it was hell – a room full of 28 boys on the precipice of puberty and four girls. Everything you imagine is accurate). So what on earth prompted me to try out for the school production of Peter Pan, I do not know.

My teacher from the year before, Mr. O’Neill, was a theater man – young, tall, bald and funny as all get out. His college stories of splitting his pants in a big finale jump just killed us all, as did his singing sessions. He would have us do spontaneous musical numbers sometimes in class, I think just so he could choreograph and let some of his lust for the theater explode out, unable to be kept in any longer. Mr. O’Neill, director and producer in one, transformed the multipurpose room of our school into a whole new land, complete with a huge pirate ship in one corner and Neverland in another. He played Captain Hook (and Mr. Darling), and kids from preschool on up filled in every other role.

It was my first time singing in front of people, my first time memorizing real lines (the script was at least an inch thick – nowadays that would be a serious stretch). My generally quiet little self just relished the chance to be hammy and big, under the guise of being someone else. I ate the entire experience up with a spoon.

When I think now that I “flew” through large groups of people wearing a gauzy pink satin nightgown, I’m rather mortified…. and proud. Would I do that today? I think not. Or maybe. I’d like to think I would. I hope I’m still that open to trying new things, to being ballsy and busting out of the small little life I normally reside in.

And besides, my mom made me wear a slip. 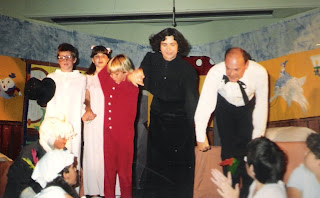